6 Hand Signs every Biker should know

6 Hand Signs every Biker should know by 6kiom:

Safe Bike riding is not just about wearing the right riding gear, Protection, lights or reflective clothing. With more and more vehicles on the road, the safety of not only you but of other riders too is very important. The way of communicating with other riders and commuters while on the road is through the use of hand signals or hand gestures. It’s not just a courtesy but It’s a basic safety to let other riders know whether you are about to take a left or right turn, stop or inform them about any potential road hazard ahead. This May for Motorcycles Awareness Month 6kiom brings you the 6 key hand signals which every biker should be aware of. 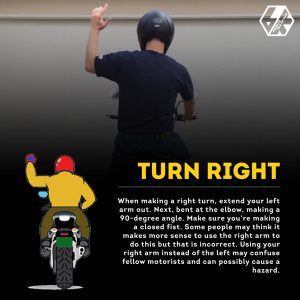 There are two hand gestures for turning right. First option is to extending the right arm fully outside, even though this way is pretty common but not legally acceptable in many countries as bikers may lose the control over the bike. The other recommended way is to extend your left arm out sideways and bent at an angle of 90 degrees at the elbow point. The hand points upwards and pam facing forward. 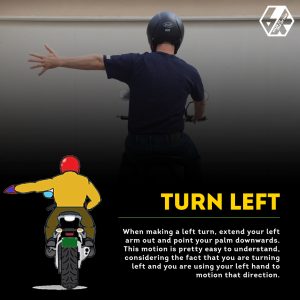 Fully extend your left arm at shoulder height while maintaining the balance of the Motorcycle, away from your body, with the palm facing down and all fingers extended. You may also use the index finger to point left. 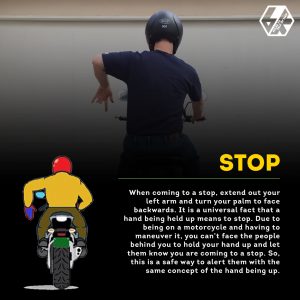 When coming to a stop, extend out your left arm and turn your palm to face backwards. It’s a universal fact that a hand being held up means stop. Due to being on a Motorcycle and having to maneuver it, you can’t face the people being you to hold your hand up and let them know you are coming to a stop. So, this is a safe way to alert them with the same concept of hand being up. 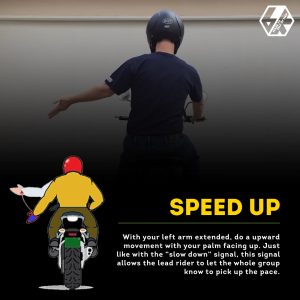 This hand signal is used to tell your fellow bikers to speed up and increase their speed to match your pace. With your left arm extended, do a upward movement with your palm facing up. 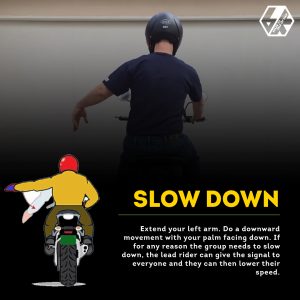 Extend your left arm. Do a downward movement with your palm facing down. If for any reason the group needs to slow down, the lead rider can give the signal to everyone and they can then lower their speed. 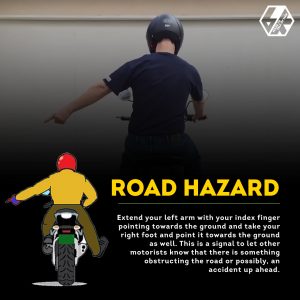 This hand signal is to let other riders know about the hazard on the road. For Hazard towards your left, extend your left arm with your Index finger pointing towards the ground. For Hazard towards your right, take your right foot and point towards the ground. This signal can also be used to let other riders know that there is something obstructing the road or possibly, an accident up ahead.

Tips To Ride Responsibly by 6kiom:

Being a biker is far from being clad in leather and chugging beer. It is about being responsible and just enjoying your machine and surrounding while riding. It is about camaraderie and about being a model for those who aspire to own a motorcycle when they are old enough to ride one.

Yes, there is a certain amount of fun in being an outlaw. But none of those apply to the laws to be followed on the road. Being on a motorcycle has additional responsibilities, which a true biker follows assiduously.

Bikes are hard to spot and are vulnerable. The fact that you drive a little automobile does not give you the right to drive recklessly.

Here are some tips on how to be a safe and responsible rider.

One of the perks of owning a motorcycle is also its biggest hazard. Which in our case is learning how to use it. When on road, it’s not just your safety that matters but everyone else’s too. Learn from the professionals before your start. Be it long hauls or crazy ass motocross stunts, train with professionals.

Checks before every ride:

As an owner, it’s always your responsibility to keep your vehicle road-worthy. Ensure every working part of your rides works to their best including the signals and lights.

Be Mindful of your surrounding:

Riding a motorcycle gives you the right to swerve through traffic. But doesn’t give you a get out of jail free pass. Maintain proper distance between vehicles and always keep a lookout for signals and pedestrians.

Always be mindful of your capabilities and your bike to support you when needed. Blasting at full speed may be fun, but unsafe for you and your fellow riders too.

Your brain and bones look better inside your body than on the road. Always be accountable for your safety. Wear proper riding gear with appropriate certification to ensure safety. Keep in mind your riding style and needs before you decide on what you require.

When to and When not to:

You should pick your moments carefully for when you go on Full Monty with the throttle and when to slow on down. It comes with experience and being responsible. The level of wisdom you acquire with experience can be life-changing for you or your fellows. Do pass on your wisdom unto those fickle minds of rookie show-offs and get them to follow all safety protocols.

Are Motorcycles Better to Ride in City Than Cars?

Are Motorcycles Better to Ride in City Than Cars?. It’s a debate as old as time. Or, at least, as old as the automotive industry. Still, the debate rages on.

Do you prefer the spaciousness of a car or the fresh air and freedom of a motorcycle?

Other questions include ones around fuel efficiency, resale value, parking, and traffic jams.

With so many things to consider, many people choose a car by default. However, as many riders know, motorcycles can be mighty rewarding.

No matter what you look for in a vehicle, there are plenty of worthwhile reasons to swap your car for a motorcycle.

Everyone is in a mad rush in cities. Commuting to your office in a car is like creating a fuss for oneself daily. Getting to your destination faster is easier with motorcycles because it can squeeze through traffic and avoid jams, as gaining an advantage in traffic requires only a gap. It can filter through the traffic easily so you reach your destination much faster.

A motor cycle can easily sift through traffic maneuvering your way to the front.

Because motorcycles are smaller than cars, they can fit into tighter spaces, which can make finding a parking spot easier.

Not only can motorcyclists save time circling the block looking for a park, they generally pay less for parking than car owners.

No Queuing Up at Tolls

Not only that the motorcycles are exempt from paying toll tax in India, but they also gain the advantage of avoiding the long queues by passing through split lanes at the toll gate. The average time spent in a car on a toll gate in India is around 10-15 minutes during the peak hours, which ideally should take 10 seconds only. Commuting on a motor cycle saves a massive chunk of your time while crossing crowded toll plazas during peak hours.

Motorcycles are more fuel-efficient than cars. Many consume less than four litres of fuel per 100km — outperforming even the most fuel-efficient hybrid cars.

This can save a motorcyclist literally thousands of rupees a year in fuel costs.

Feel Closer to the Nature

Imagine this: sunshine, a cool breeze, an open road, and the scent of leather and the great outdoors.

Few things beat the fresh air and freedom you experience when riding a motorcycle. It can be equal parts exhilarating and liberating.

Studies have shown that riding a motorcycle can both reduce stress and promote relaxation.

A recent study found that riding a motorcycle had “a positive effect on stress levels, decreasing hormonal biomarkers by 28 percent compared to the other measured activities”.

Sounds like the ideal excuse to hit the road!

Motorcycles are fun. You’re roaring down the road, adrenaline pumping, off on an adventure.

In contrast, many cars are simply a way for their owners to get from point A to point B.

Not only are motorcycles a whole lot of fun, they’re also good for your health.

A 70kg motorcycle rider will burn an average of 170 calories during a one-hour ride — roughly 40 calories more than the same person would burn by driving a car for one hour.

Plus, riding a motorcycle engages far more muscle groups than driving, giving you a full-body workout. While this admittedly isn’t enough to forego your regular exercise routine, it’s certainly a nice bonus!

When was the last time you cleaned your car (driving in the rain doesn’t count)?

If it’s been longer than you’d like to admit, don’t worry, you’re not alone.

The good news is that motorcycles are significantly easier to clean than cars, for the simple reason there’s less to clean.

This is particularly true for people who ride their motorcycles mainly on sealed roads (as opposed to off-road).

Plus, you don’t have to worry about decluttering the boot, tidying the glovebox, or trying to clean under seats.

Over time, cars have gained an advantage over motorcycles when it comes to safety concerns. But today, we have a plethora of safety gears for the biking community that offers utmost safety so that you do not have to compromise on your love for the two-wheeled engineering marvel.

So grab your helmet and other safety gear to zoom through traffic. 😉

close
close
Start typing to see products you are looking for.